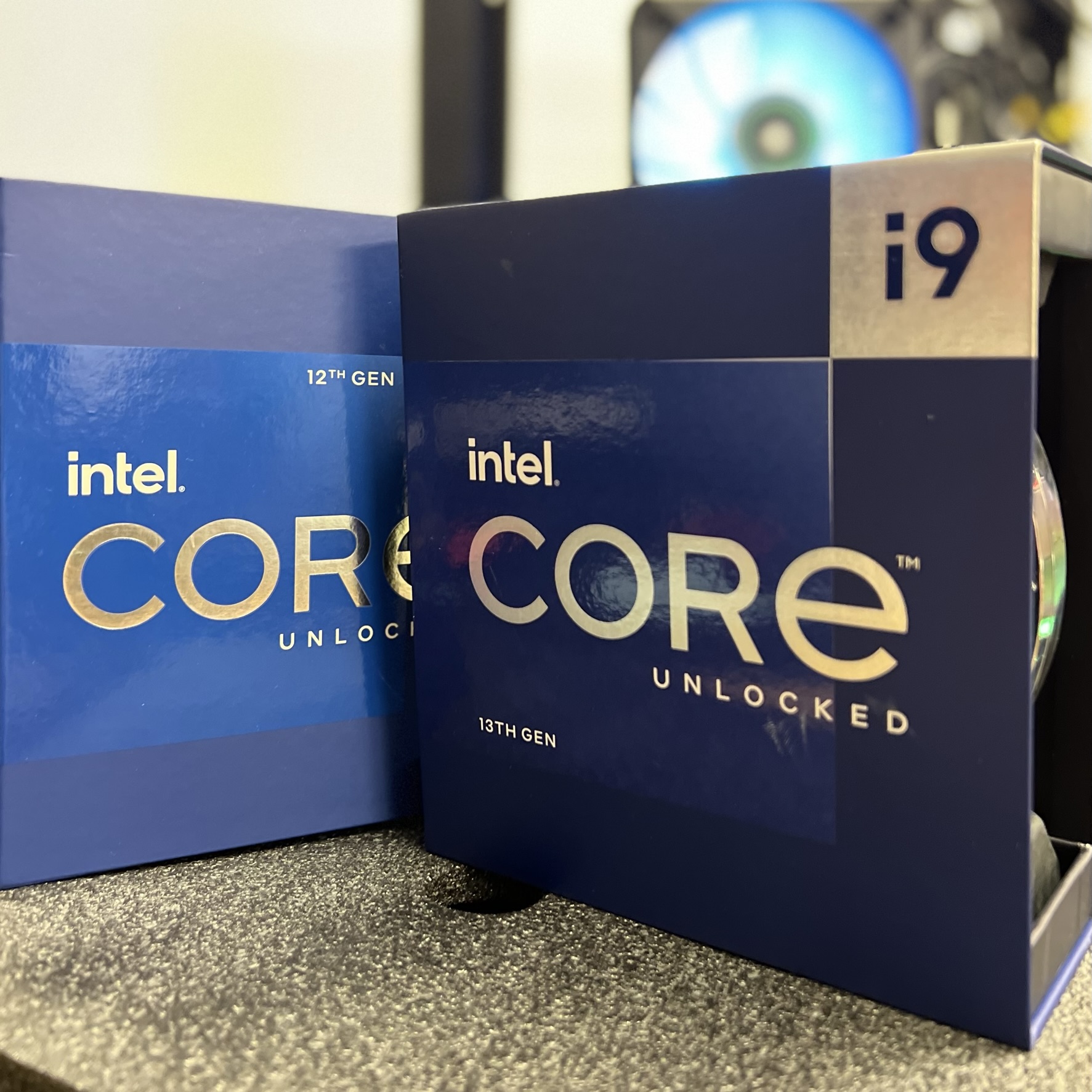 
Move over Alder Lake, Intel’s newest Raptor Lake CPUs are finally out and ready to take the PC world by storm. Or are they? With the Intel Core i9-13900K boasting an incredible 24 total cores thanks to addition of 8 more E-cores, this new CPU can reach super-high clock speeds allowing you to get the most out of your setup. That being said, how much of a difference does this upgrade really make when it comes to gaming? Sure getting the newest technology is always a good idea if you want to make sure your adversary doesn’t have that edge on you, but it usually comes with a pretty high cost. If you’re wondering if the switch to a 13th might be the missing piece of the puzzle to finally get the most out of your games, keep reading because we’re about to show you how much better the 13th gen really is compared to its predecessor.

We tested a 12th gen and 13th gen CPU across nine (9) different games in three (3) different categories to see how each were performing in terms of FPS.


For today’s benchmarks, we are showing the results obtained on the 2022 version of our Tower Pro gaming pc. More precisely, here is the configuration we used for our tests:


Along with this configuration, we tested the following processors:


The categories in which we decided to do our tests are battle royales, AAA titles, and first-person shooters.


In each category, here are the titles we tested:


Here’s how we calculated our averages for each category:


If we take the i9-12900K in the battle royale category we got the following results for each game:


The average amount of FPS for this processor for the chosen category would be:


As expected, a CPU upgrade doesn’t seem to make much of a difference when it comes to AAA titles. Horizon Zero Dawn showed no improvement in the frame rate between the 12900K and the 13900K with both CPUs managing a nice 201 FPS. Red Dead Redemption 2 is second least impacted in the category with a measly 2% improvement between the CPUs, with the 12900K managing 199 FPS and the 13900K adding a mere 3 additional frames to reach 202 FPS. Borderlands 3 on the other hand showed an impressive 23% improvement in framerate with the 12900K giving us a cool 160 FPS, while the 13900K allows us to reach 197 FPS.


Now, at this point in might be obvious that graphic heavy games like AAA titles mostly require GPU power, but you still must be careful about your CPU bottlenecking. Looking at the chart above it’s safe to say that getting a new CPU if you mostly play AAA titles in 1080p is not really necessary, unless you’re trying to make sure you get the best out of your GPU or you’re literally a Borderlands 3 addict.


Better CPU = More chicken dinners? That could be the case


When it comes to Battle royales, the improvement seems to be much better than in the previous category. As we can see Fortnite showed the most improvement, with the 12900K reaching 220FPS while the 13900K managed a nice 250 FPS, which makes for a 14% improvement between the two CPUs. Even Warzone, a game known to be very poorly optimized, showed at least 5% improvement with the 13900K allowing us to reach 215 FPS while the 12900K managed to dish out 205 FPS. Now as we can see for Apex Legends, there was absolutely no change as both CPUs managed to reach the game’s full potential of 300 FPS.


So, as we can see upgrading your CPU might be something to consider if you want to unlock more frames in this category although it might cost you a pretty penny. It’s nice to see that even a game like Warzone that is notorious for its subpar optimization benefits from that upgrade. Fortnite, which has been (and probably still is) the most popular battle royale also showed quite a bit of improvement. This can be interesting for competitive battle royale players as these couple extra frames could very well give them an edge on their adversaries. If you’re more of a casual player or just don’t feel like shelling out that much money, the 12900K still is an excellent choice.


If Frames win Games, then your rank is on a rocket to the moon.


Our last category is our beloved FPS games tested on a 1080p resolution. As we can see on the chart below, the improvement from the CPU is quite interesting to say the least. First of all, Rainbow Six Siege makes some incredible gains with this CPU upgrade with the 13900K allowing us to reach a whopping 686 FPS, a 33% improvement from the 12900K that still managed to give a nice 515 FPS. Across all three categories this is the game that showed the most improvement from upgrade. Looking at Valorant next, the 12900K manages 520 FPS while the 13900K is able to put out a nice 600, which makes for a 15% improvement. When it comes to Overwatch, both the CPUs were able to reach 585 FPS.


When it comes to FPS games, CPU power can be important as these are usually very fast paced. A CPU upgrade almost always makes some improvement in the framerate of those games, but that also depends on the game’s requirements and also the FPS cap point. As we can see for Overwatch 2, at 1080p, both the 12th gen and the 13th gen were able to reach 585, which is awesome considering the game itself is capped at 600 FPS. If you’re a very competitive FPS player and love to play Valorant or Rainbow Six, a CPU upgrade can only really be a good choice if you have the budget for it. This could be a serious advantage in game considering input lag can be a defining factor at high levels of play. It’s also important to remember that this frame might fluctuate depending on maps, especially on games like Overwatch 2.


As we’ve seen previously above, the results in the AAA category are almost solely due to Borderlands 3 which makes the category average a bit misleading. Overall battle royales seemed to show a more conclusive average with Fortnite and even Warzone showing decent improvement. The first-person shoot (FPS) category is obviously the winner here with all of its games showing significant improvement, apart from Overwatch 2 where both CPU were able to match each other in performance.


From what we can see on the charts above, when playing at 1080p, the FPS improvement due to switching from an i9-12900K to a i9-13900K can range from inexistant to incredible based on the games you play. FPS games were the category most impacted with 15% improvement on average. Battle royales and AAA titles, showed similar results with the categories showing improvement averages of 6% and 7% respectively. Unlike with the FPS games and maybe Battle royales, the AAA average is mostly only due to one game and is not very representative of the category. You also have to keep in mind that all of our tests are done with each game on maximum graphic settings and so you could definitely improve the FPS performance if you tweaked the settings a bit.


Overall, upgrading to a 13900K from a 12900K mostly makes sense if you’re a competitive player spending more time on battle royales or FPS games, but even then, again you have to consider the price factor. The i9-12900K is still an amazing CPU for gaming able to dishes out above average in-game performance in 1080p for most games and we’re confident you won’t be missing out on much with it (especially if you pair it with a RTX 4090 24GB). On the other hand, whether you’re building yourself or buying a brand-new gaming rig (which is something we can definitely help you with), both the 12900K and the 13900K are great choices to consider. Of course, the 13th gen would allow you to be a bit more future proof but if you’re a little bit more worried about your budget, the 12900K is all you really need, even at competitive level.


We hope that this article helped you better understand the capabilities of Intel’s newest Raptor Lake CPU when it comes to gaming.


Keep a lookout for our upcoming article where we plan on testing out the performance of these new 13th gen processors and the latest RTX 4000 series in 1440p!


If you have any questions about the results presented here or maybe other configurations, feel free to reach out to us on our socials.