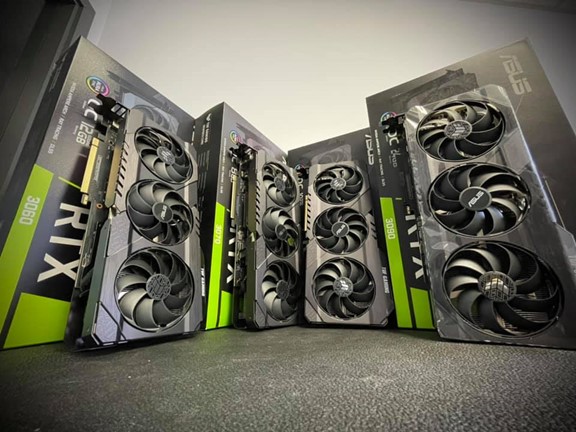 WHEN SHOULD YOU UPGRADE YOUR GPU?

Are you thinking of upgrading your graphics card? Afterall, maybe you’ve started with an i5 / 3060 configuration, and you are now eager for more performance. Plus, you just got this fat bonus, and you have your eye on a sweet deal that’s on the RTX 3080 at your local store.


Perfect time to upgrade right? But is it worth it?


Game On investigated it and tested a total of 21 possible configurations based on seven (7) GPU models and three (3) processors. We tested these duos on 15 games at 1080p covering categories like first person shooters, battle royals, and AAA tittles. Out of those 15 games, we have decided to publish the results of Fortnite and Warzone since they are giving us clear exemple of (a) a situation where a game is bottlenecked by the processor, and (b) a situation where a processor unlocks all the power of the graphics cards.


The objective of doing these tests was first to pinpoint when a GPU upgrade is worth it, when is it an absolute waste of money. Secondly to establish a $/FPS chart so that we can see which few of all the tested combinations are the most efficient.


For today’s article, we are showing the benchmarks’ results obtained on the 2022 version of our Tower Pro gaming PC. More precisely, here are the configurations that we tested:


For each processor, we have tested the following graphics cards:


As mentioned earlier, the games we compared are listed below. Please note that we have benchmarks for over 15 games at 1080p at Game On.


And just before we start with the numbers, here’s something new. While testing all those games, wanted to add some extra fun to it. So we came up with an efficiency ratio that would incorporate both the amount of money someone would spent on a of the builds and the in-game performance of he or she would get with that build. So, here’s how we did build the $/FPS ratio:


Graphics Card Performance on an i5 Computer


However, there are two good things with the 12th gen i5. The first is that GPU for GPU, you will sensibly get the same performance as if you were playing on a computer equipped with an i7 processor. While you’ll get about 5% increase in performance with the 3060, 3060 ti, 3070, our tests showed that you will be getting the exact same performance from the 3080 10GB, 3080 ti, and 3090 with both processors.


Graphics Card Performance on an i7 Computer


As mentioned in the section before, the i7 gives a similar performance to the i5 when it comes to playing Fortnite with higher end cards. Now most people play multiple games. Hence, we are not saying that the i5 is as performant as the i7 in all environments. However, if you are getting a gaming PC to play Fortnite exclusively, and do not care about other benefits the i7 can provide , there is really no need to get the i7 processor on your PC.


In term of efficiency ratio for the i7, everything is orange at best. It even gets red in the entry level and in the higher range. From our testing, we found that the i7 has the worse efficiency ratio of the 3 processor options to play Fortnite


Graphics Card Performance on an i9 Computer


If money is no object and you are in gaming to dominate every game you play, things are different. In that case, you might want to consider the ultimate performance combo, i9-12900k with an RTX 3090. Yes, it comes at an estimated steep price of $5,419. But as expected, you’ll get the highest FPS found in our benchmarks today, at a ridiculously good 255 frames per second.


The i9 finally provides the second-best efficiency ratio of all the combinations we have tested. With a combo of the i9-12900k and the RTX 3060 ti, you’re getting 195 frames per second. With a PC that retails approximately at $3,194, it gives us an efficiency ratio of 16$ per FPS. So basically, if you are an Fortnite player, but also looking for a PC to run processor-intensive task, this configuration might be just right for you.

BENCHMARK 2 : Warzone – GPU performance is bottlenecked with an i5-12600k


Graphics Card Performance on an i5 Computer


Playing Warzone with an i5 will give you FPS ranging between 110 to 125 – a 15% increase in performance from 3060 to 3090. This low 110 FPS that we got is not surprising, since Warzone is known to perform poorly on almost any configurations. (read, Warezone a being badly optimized game). Additionnally, we came accross this odd thing during our tests where it simply refused to give us any significant  increase in performance no matther what GPUs we would throw at it, including the BFGPU, the RTX 3090.


As far as efficiency ratios goes, they are where we expect them to be. From bad to very bad. With a game that is so bottlenecked by your processor, we could have guessed that the combo with the higher tiers of the graphics card would give terrible ratios.


Graphics Card Performance on an i7 Computer


The efficiency ratios for the i7 are from average to bad. However, while the i7 might not look like it offers the best bang for you buck in Warzone, that is probably here that we find the most popular configuration with the i7/3070 combo because this combination seems to hit anywhere between good to average in most of the games that we have tested.


Graphics Card Performance on an i9 Computer


Amazingly, the i9 finally provides the best efficiency ratio of all the combinations we have tested for Warzone. With a combo of the i9-12900k and the RTX 3070 ti, you’re getting 180 frames per second. With a PC that retails approximately at $3,544, it gives us an efficiency ratio of 20$ per FPS. For Warzone player with unlimited budget, that seems to be the best bang for your buck.


As dramatic as it sounds, that is the cold reality of installing an RTX 3090 on a PC that has an i5-12600k as processor. It is simply not worth it. So that proves the point that simply upgrading our graphics card will not necessarily lead to a significant increase in performance.


On the other hand, if the PC is equipped with an i9-12900k, it unlocks a world of possibilities. And there, an RTX 3090 might not give the best efficiency ratio, but it will definitely get you the highest frames per second possible.


To conclude, we hope that this post helps you understand better the notion of bottlenecks. If you have questions about the results we got with other games or maybe other configurations, feel free to reach out to us on our socials. We have data for many more games including Overwatch, Valorant, Red Dead Redemption II, and much more.


Thank you for reading.